Sebarau is one very peculiar fish that dwells in the narrow and shallow streams of Borneo Island and few other places in South-East Asia. Its closer Western counterpart can probably be a chub or some sort of carp-like fish. Although probably born a bottom feeder, this fish has developed a taste for topwater lures that is second just to local snakeheads, with which they compete for food.

The last week of January 2020 we decided to fly over to Kalimantan to spend some time on the river with old friends. The Chinese New Year was the perfect occasion to gather up and celebrate together, even if the threat of Covid-19 was already gaining momentum, overshadowing the general mood of happiness and light heartedness.

We travel quite often to South-East Asia to fish for different types of fresh and salt water species and most of the time we end up being confined in tiny little boats headed upstream. And despite these are not exactly comfortable, we just love the feeling of being surrounded by the jungle and its noisy buzzing that keeps us company, as we cast our lures towards the bank, between rocks and logs, watching them cut through the surface of the stream. It is something we will never grow tired of. 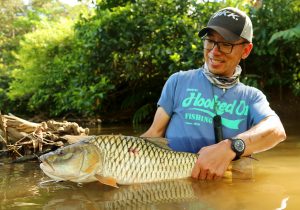 The rain had stopped after few days and the sun was shining brightly. We fished for four days straight, camped just outside the jungle in a tiny village of fishermen. Every morning we would drive into the woods and emerge back as the sun was setting. Frankly we did not catch so many fish nor big prey, but the features of the fish we landed were so peculiar, the nature around us so overwhelmingly plentiful, the company so pleasant that the overall experience was just a comforting success.