It was just another day with the same old fishing pals. This is how the best stories always begin, isn’t it? Every September, we fish on the same lake. We start our trek to the lake early Saturday morning, bringing just the essentials. It’s a one-hour drive to the lake: The town is still and quiet during the early hours of the morning. But on the way, we make a quick stop at the bakery–the only one in town that happily welcomes clients with coffee and freshly baked pastries. And the small-town picture in our rearview window gradually turns into a countryside capture. Light mist hangs atop the fields, and the mountains take shape as we drive closer to our destination.

After a while, the road turns into a valley carved by one of the region’s most beautiful rivers. The area is crowded with rainbow trout that some fly fishermen have already set out to tackle. We slowly drive uphill, make a few hairpin turns, and approach a long tunnel. We finally reach a small plateau surrounded by mountains that are tinted by autumn leaves. We swing by the local village to collect the boat equipment, and then we set off to the lake.

As we drag the boat into the water, we secure the electric engine and load our fishing gear. The air is filled with a sense of anticipation–one that’s felt by every angler as he is about to cast his lines.

The lake is formed by a dam built to generate hydropower. Its sunken features–or rather non-features–resemble that of a giant bathtub, with a maximum depth of 65 meters that varies according to the season. Today the level is well-below normal conditions, as we see the exact point where the vegetation turns into white rocks. We estimate there’s been a drop in the water level by at least 10 meters, which must have just happened a few days ago. The warm temperatures and unusual absence of wind aren’t exactly the fishing conditions we were hoping for.

Five other boats leave with us at 7:30 a.m. We fix our gaze on some other fishermen, realizing they’re using a variety of fishing strategies: Anglers use small, soft lures, while others let their jig heads bounce to the bottom of the lake. Some use massive lures to entice big mamas, and jerkbaits. Some use topwater lures as well. Three people on the boat, and we decide to change up our fishing strategies and techniques. One person slides a white hair bug into the snap, and the other a shiny spinnerbait. As for me, I decide to give it a go with a fairly big and soft swimbait.

Three hours later … and? Nothing. The lake is spectacular in its stillness, but this doesn’t help. We try different depths, and we switch to other types of lures. Still, nothing seems to be working for us today. There’s not a single cloud in the sky, and no breeze to aid us as we fish. Other crews look as if they are just as frustrated as we are.

Since we’ve run out of things to talk about, we decide to take a lunch-break. We crack open a few cold beers, break out the sandwiches, and enjoy the weather for a while. Some talk about calling it a day. Yeah, why don’t we call it a day at 4 p.m.? We can head down to the local bar that overlooks the lake, and then head back to the little flat we rented for the weekend. There, we can shower, have dinner, and hit the hay by 10 p.m.

It’s a tempting daydream, indeed, as we wait for this no-good day to come to an end.

With such thoughts hanging over our discouraged crew, we get back on the lake as the sun shines brighter than ever. Some boats already start to make their way towards the dock. The drift we try slides over some shallows that rise from a 40-meter drop, stretching over roughly 100 meters, some 30 meters away along the bank. No sight of sunken structures, but at least we found a different fishing spot.

But, alas, the change of scenery doesn’t really mean anything. If they don’t feel like biting, they won’t–no matter which lure you cast over them.

The drifting is unbearably slow, and we’ve thoroughly covered the entire area.

Now we are extremely frustrated. I can still picture that moment as it is rather familiar to all anglers–the three of us putting our rods down, rolling up a cigarette, and thinking about what to do next. As we take a break around 3 p.m., a breeze rises, slowly bringing tiny clouds closer to the lake. We take it as a bit of encouragement–even though it doesn’t really change the crew’s attitude. We move towards the northern part of the lake, passing through a narrow section as the shallows rapidly turn into a steep sunken slope.

We start fishing crankbaits, and, after few casts, one of my mates hooks a small, lively pike that reels into the net in just few seconds. She’s beautifully colored—not exactly the trophy fish we were after, but it definitely comes as a relief to the crew.

We look at each other, and we just know what to do. We decide to try the drift again–this time, the opposite way down. We still have some 50 meters before reaching the shallow plateau, and we figure we can still fish the drop leading to it. We secure three different crank baits to our lines. One crewmember sticks with a shiny silver 4m-depth crank, the same one that he used earlier to land a small pike. The other member switch to a big, brown, and worn-down crankbait. I, instead, try my hand at a smaller crankbait. I start to think about how much I prefer fishing spinner baits instead of cranks. As I patiently wait, I have to admit, however, that I’m excited. My hands gently vibrate as the rod tips and dips ever so slightly. Jerkbait fishing also brings about this sort of anticipation.

A few casts in. A few casts out. I start to reel in, and suddenly my line feels weightless–as if nothing is attached to my snap. You know that moment? You’re prepared for the strike, for the snag, for anything pulling the damn line. Tightening it. Breaking it. Moving it. You don’t expect this. But you know something’s coming.

I think I lost my lure. I reel back, and I can’t feel a thing. A few seconds into the reeling, and I feel the weight again. This is no lure … no snag either, so I instinctively strike, and …. damn it. It is a snag. I pull hard and nothing moves. Must be a snag. Then, slowly, the tightened line starts moving, and I feel an unprecedented power underneath the boat.

It is a heavy weight. You know it when you pull and can’t move a thing. If you’re lucky you may be able to drive her towards you, well aware that it would take just a second for her to turn back and make your drag scream. She gradually rises from the bottom, and we get a glimpse at her grandiose size.

Although he’s the most experienced of the crew, he doesn’t stop yelling out of sheer excitement. Yes, he’s perfectly aware that we have not netted her yet, and that the real fight is going to start the moment she reaches the surface. I can’t see my lure, not even the snap. She must have swallowed it deep into her body–one hook stuck in the mouth, the other in the throat. It doesn’t come as a surprise to us, but the moment she breaks the surface, she turns her large body, tail shining in the daylight, and splashes water all over us. In doing so, she takes part of the line down with her. I expect the fight to be more intense from a pike this size, knowing that the hook in her throat must hurt like hell. I quickly reel her back in, closer to the net, as a few splashes of water touch the boat. 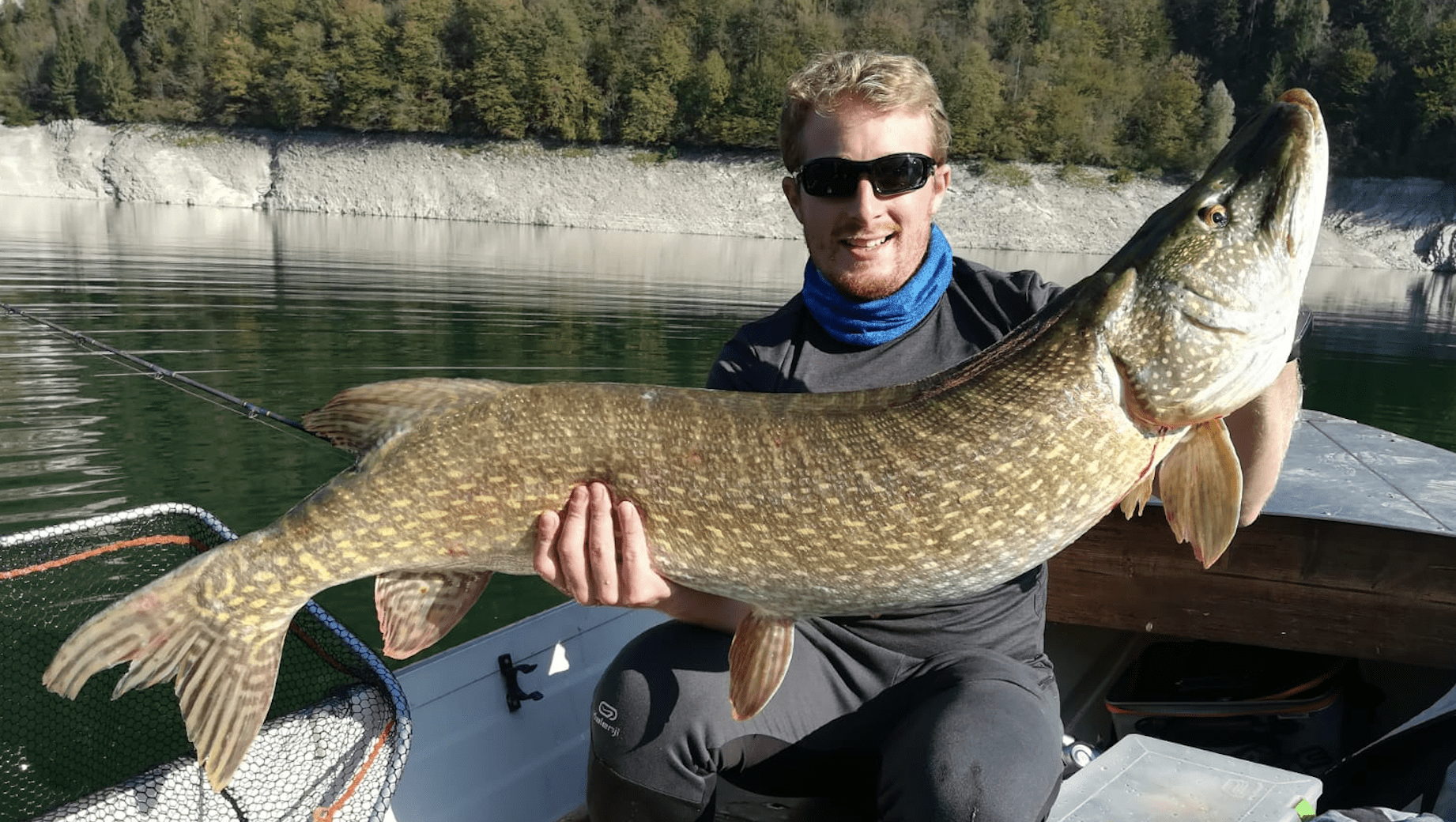 The net is still under the surface. I drag her over it, and the net bags her from the tail upward. Doesn’t fit. But, we’re not too bothered by that. We got her. She’s in. Well, her head isn’t really in, but still–we made it. My legs are sporadically shaking as I’ve never seen a fish this size in my life. She’s not only long but large, strong, and thick. This fish must be at least 20-years old.

As a crewmember grabs her by the gill, the other gets in position to help widen her mouth. I get the pliers to unhook her, which is not an easy job if your hands are still shaking. As we expected, the lure seems to be stuck in the middle of her throat. It takes over a minute, but I finally manage to get both hooks out. We place her back into the net where she can rest. We unwrap the measuring mat, wet it, and position the fish onto it. The end of her tail is 115 cm and she seems to weigh between 14 and 15 kg. She may not be a 130, but she’s certainly one hell of a fish.

We take a couple of pictures with the beauty and quickly put her back where she belongs. I can still feel the strength of her body in my hands as I slowly move her back and forth under the water. Just a minute later, she takes off with a final splash into the lake.